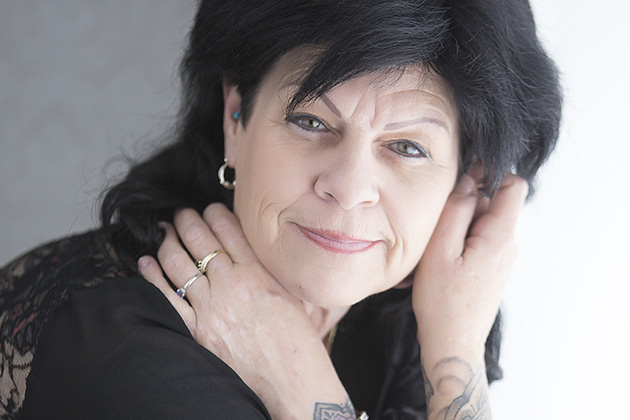 I tried to commit suicide twice …

What’s the craziest thing I’ve ever done? I’ve done lots of crazy things but when I was 17 I got in with the wrong crowd. The craziest thing I ever did was get into a car with someone I didn’t know, I was getting a lift home, I was assaulted and I kind of never got over that.
I love my quirkiness, everyone in the world is an individual and I’ve struggled with some of the choices I’ve made in life – first tattoo at 15 (and I’m still going) it’s certainly something that’s an artful expression to me and each tattoo means something, a lot of people don’t like them, I still even now at my age get ‘looks’.
I really struggled in my youth, I tried to commit suicide when I was 18, I was almost successful … that was the second of two attempts, however things improved, I got married and had a child and now I have 3 grandchildren.

It took me a long time to come to grips with myself and it wasn’t really until I was 50 that I forgave myself and accepted my life for what it was.
The confidence I got from seeing these beautiful portraits I can’t describe – I cried my eyes out when I saw them. I’ve turned my life around really since moving down to Fremantle, I sing a lot, I’ve joined a choir but I love singing. If I could change anything I think I would have had my baby later in life, I was pregnant at 17 but lost that baby and I had Melanie when I was 21.

I came to see Boudoir Photography to have some portraits done and especially in the boudoir style, it’s something I have never done before and it has lifted my confidence 100%

School – we were just being babysat and the level of education was poor, even though I was a straight A student I rebelled, I asked too many questions and the establishment didn’t like that so I was marginalised and branded a rebel. I had done all of the hard work but when I came to Australia, the last two years were a waste of time – all my own fault but it’s not easy at that age.

If I have any advice for women it would be this ‘It’s very hard to have a continual internal belief system but you have to believe in yourself, do the things that make you happy – after all what else is there?’