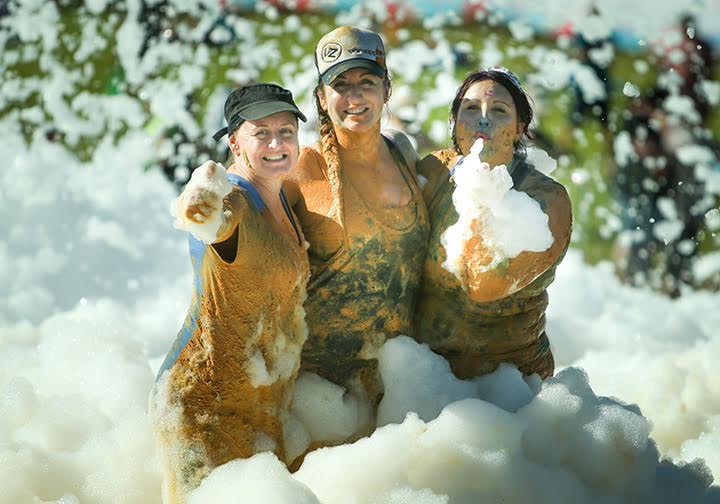 When Michelle told us that she had entered for us to run at the Miss Muddy 2017 event, we

were all a little surprised. Okay, frankly, we were dumbfounded – it seemed

other than Chanel, let alone mud. Having said that, I think it would be hard for

anyone to resist a 5k female fun run with an obstacle course of colour, foam, So yesterday, being an unusually bright and sunny April day, we found ourselves at our

stand surrounded by about 4-5,000 other women. The atmosphere was incredible.

It was like being in some sort of surreal oestrogen bubble. There was so much

energy and excitement that we couldn’t help but get a buzz from it, although we

did have a little help from the Music that was pumping all day! Plus, the DJ was

great at keeping the energy up. Always looking for an opportunity to pamper our girls outside the studio, we decided to

and after their run. Basically, we wanted to make sure that all the ladies had their

(The band-aids were of course Beas’s idea – she’s such a mum). In addition to keeping our participating ladies fabulous, we had a beautiful competition

for them all to enter, so that they could be in for the chance of winning themselves

inspired to have little competition of her own…she wanted to see if women would join us,

and be brave enough to do a before and an after photo at the event. This is a particularly big ask for women, who often feel like they can’t live up to the

aesthetic expectations of our society in general. So to get women to have their

risky endeavour. It turns out, the women at Miss Muddy were gutsy, beautiful and

proud! Even covered in mud, foam and paint, with bruises, sprains and stitches, all

the women looked beautiful. They were happy, and exhilarated and strong. It

turns out it’s not the glitz and the glamour that make the woman beautiful,

something we’ve often seen in the studio, but maybe never truly appreciated until To see so many women; mothers, sisters, friends and colleagues all come together for this

event was overwhelming. A lot of teams had their own uniforms (some of which were

utterly fantastic) and many of them were running to raise money for charities.

There were a lot of amazing women there, and we were fortunate enough to meet so It was great to be able to talk to them and hear their stories, like Skye and Alicia, two

friends who, between them, have 5 kids and have lost over 80 kilos! They decided to take part in Miss Muddy 2017 together like real partners in crime. We were so inspired

by their weight loss, which they achieved through sheer hard work and determination,

that we decided to make them instant winners, and are treating them to luxury By the time Miss Muddy 2017 was over, we were all totally wiped out; covered head to toe in mud, and

with stupid grins on our faces. Becky of course, was totally in her element and did

two runs (our country girl can’t get enough!). We have crowned her Miss Muddy 2017! Michelle, to our surprise, ended up doing two runs herself! She went from full on dreading it,

to totally embracing it! She emerged like some sort of mother earth figure, bringing her elegance to

even the most unlikely of places. Alice on the other hand, in her own adorkable way, totally left her inhibitions behind and bounced her way through the course like a 5 year old in a ball pit. Needless to say…I think we’ll be going again next year!

Mark Lait
Previous post What losing 60 kilos taught me about self-confidence Next post We’ve announced the winner of our beautiful E-Bridal engagement ring, and you might recognise her!